The final lesson from Allyson Apsey in The Path to Serendipity was to “Sing my Song loudly” ~ so what better choice as my next #summerread than to dive into The Pepper Effect by Sean Gaillard, and hum my way through numerous Beatles classics, picking up inspiring leadership moves along the way! 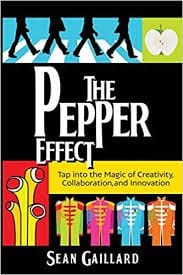 Gaillard provides his readers with a lyrical approach to leadership which challenges the status quo and in turn provides a playlist for how to create a collaborative and creative school community.

This leadership book is peppered (groan ~ sorry, couldn’t resist) with “Next Moves and Grooves” which cause the reader to stop and reflect on current practices as well as providing them with concrete examples of how to impact educators, students and school communities.  The use of Twitter as a platform for celebrating learning, flipping a staff meeting into an EdCamp model, creative ways of collecting student voice and abandoning meaningless practices are but a few of the well-crafted ideas within this book.

Although I appreciated the style of the book and it’s suggestions as to how to evolve my practice, I found myself drawn more to the story of the Beatles during their creation of their iconic Sgt. Pepper’s Lonely Hearts Club Band album and how it relates to sustainability ~ and ultimately to school culture sustainability.

As I reread chapter 6, I made connections between the Beatles’ desire to depart from the very sound that had caused Beatlemania just a few years prior as they created this new sound and other musical groups. Didn’t the Beach Boys (Brian Wilson) make a similar move when they produced Pet Sounds ~  an album’s sound that was a huge departure from the “surfing sound” that the public had come to connect with the Beach Boys?  This new sound was one which couldn’t be recreated live because of the unconventional mix of various instruments.

The blending of both Eastern and Western sounds, along with unconventional instruments such as tissue paper, combs (Beatles) bicycle bells and Coca-Cola cans (Beach Boys) lead me to wonder about the importance of Global influences and trends which may initially be considered unconventional when looking for successful sustainability strategies for school cultures.

“With a little help from my Friends” takes on a whole new meaning when you look beyond what your own school board is doing and embrace Provincial, National and International practices which are proving to positively impact both teacher efficacy and student achievement.

I couldn’t help but wonder ~ is the key to sustainability, the ability to “not” sustain the status quo, but to disrupt the very recipe that brought you success in the first place?  Steven Katz and Lisa Dack who penned, Intentional Interruption would certainly have us believe that in order for organizations to move forward they need to disrupt the status quo for professional learning in order to influence teacher practice and subsequently student achievement.

We will continue to ponder these ideas as we get set to embark on year 2 at Sir Arthur Currie.  We’ve committed to veer away from a status quo mindset as much as possible in order to be “Getting Better” all the time.

I love and, at times, overuse the phrase, “What if”?  So I was thrilled when Gaillard left his readers with this “what if” challenge.  “What if we connected with our kids as The Beatles did in wanting to create something bold and innovative for their fans? What if we created something every day at masterpiece levels for our kids? What if we inspired our kids to do the same thing?”

To my friends, who help me get by ~ what are your thoughts on school sustainability?  Come write with me…

One thought on “Pondering the Pepper Effect”