One again, I found myself watching a “sports-inspired” movie and ending up finding inspiration for the world of education. 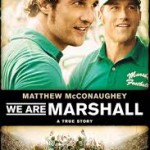 We are Marshall depicts the story of the 1970 plane crash which claimed 75 lives, including the majority  of the Marshall University football team, their coaching staff and boosters.  Following the crash, a new coach, Jack Lengyel, portrayed by Matthew McCongaughey rebuilds not only the team but the small town of Huntington.

Rebuilding a team from scratch was no small feat.  The first obstacle was to petition the NCAA to allow freshmen to play. When phone calls and letters were not working, Coach Lengyel asked the College president two poignant questions. “Did you propose to your wife over the phone?” and “Did she answer you in a letter?”

I started to reflect on the pros and cons of electronic communication. Within our world of education, emails fly back and forth throughout the day, our fingers fly over our smartphones as we send text messages and we have crafted our tweets down to 140 characters in order to send our messages out to the world.

At times we all need the reminder that the most important communication needs to happen face to face. Efficient does not always equate to Effective. 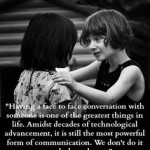 The second obstacle involved learning and perfecting a new play that the Marshall team of freshman players could execute with precision.  On the theory that “it doesn’t hurt to ask”, the coaching team asked the West Virginia team coach, Bobby Bowden, if they could study their “V” play, knowing that the teams would not compete against each other this season. In the competitive world of college football, it would have been common practice to deny such a request.  But that didn’t happen.  The Marshall team was allowed to study the play until they had had it perfected.  By sharing their knowledge, the Virginia team not only positioned themselves as a class act, but they helped to strengthen the league.

In education, we all become better and more effective when we share our best practices, best assessment strategies, best resources and latest evolution of an idea. All too often we still become territorial about the work that we are doing in our classrooms. Collaborative networking creates the conditions for us to share and learn together. We just need to embrace networks (both formal and informal) and look upon them as a natural way to “do business” 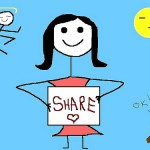 We are Marshall reinforced a couple of key components for educational improvement ~ Know when to have that face to face conversation and intentionally share.

What is another sports-inspired movie that inspires the educator in you?

Come write with me…….