And the winner is……everyone in London who has been on the receiving end of any of the numerous programs recognized last night at the 10th Annual Pillar Innovation Awards. One can’t help but be humbled by the amazing work of so many dedicated and caring individuals who take on the most challenging of situations in order the makes the lives of others better.  As someone who was born and raised right here in London Ontario, last night was a moment of pride in “my” city.  A city where diversity is celebrated and innovative practice is recognized as a way of ensuring that we continue to always look for better ways to make a difference.

As the ceremony transitioned from opening ceremonies and sponsor recognitions to highlighting the work of each finalist via the video clips that were created by Gotham Studios,  I watched with great anticipation as I had not seen the final version of our presentation. I worried that my words of recognition for the incredible team and the work that they did might be lost on the editing floor. But, alas, my fears were alleviated and the production company captured and created a product that our GENTLE Thames Valley team could be proud of.

As the name of the winner in our category was announced and our team made their way to the podium amidst a standing ovation, I paused at the bottom of the staircase and saw the pride in each members’ eyes as they joined me on stage to receive the recognition they so greatly deserved.  I was thankful that the selection of our program provided me with an opportunity to publicly acknowledge all of the contributing factors to the success of GENTLE.  From the inception of the concept by Denise and Melanie to the celebratory cake on our final day, there wasn’t a department within TVDSB that didn’t somehow impact the work.   We can ALL be proud of our response to the “almost 500” Syrian newcomer students who became a part of our Thames Valley family between January and April. 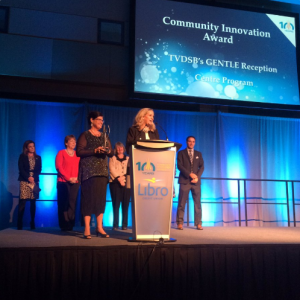 As the music ushered us across the stage, we were whisked away by the photographer for a number of group shots and then a reporter wanted a few minutes for a news report, so I stepped out into the hall and answered a few questions.  After enjoying a chance encounter with the wife of a former colleague in the hallway, I slipped back into the reception hall and waited quietly at the side, as the next recipient gave his acceptance speech.

Then all of sudden I heard, “Mrs. Bruyns” and to my surprise a former student from Wilfrid Jury rushed up with his older brother and threw his arms around me. His brother shared that when he saw me on stage, he became determined that he would come and find me.  It was at that moment, that those tears of pride that had been so controlled all night, started to trickle down my cheeks.  For you see, this student was there as sponsored member of the Children’s Aid Society’s table and I remember all too well his younger years and the challenges and the struggles that this boy endured as a young child.  I was thrilled that he was safe and attending a new school.