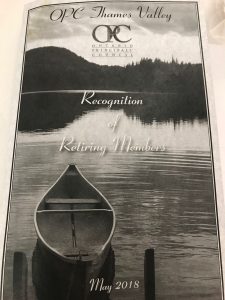 Last night the Thames Valley District School Board honoured approximately 30 administrators and 1 Associate Director at their annual OPC Retirement Celebration.   About a month ago, when the list of school assignment changes was published, I recall reading, in disbelief, the number of my contemporaries who were not listed beside a new school location, but whose next assignment was listed as “retirement”.  Retirement?? How is that even possible?   Yet, when one does the math, it certainly makes sense.  I was presented (again in disbelief) with my 30 year pin earlier this year and although I rarely look at the pension pamphlet that arrives periodically in the mail,  the last time I peeked, I’m pretty sure that, on paper, my “Freedom 55” is just around the corner.  Although, I currently plan on taking a few more laps before turning that corner.

Last night’s celebration became emotional as I watched with nostalgia, pride and joy as two special honourees were recognized. Both of these educators played an integral part at pivotal moments in my career and I’m not sure that I’ll ever be able to express how much they have meant to me over the years.

Valerie Nielsen, our Associate Director, and I met in Teacher’s College.  We were placed in the same panel and as we had both been married the summer prior to attending Althouse, the mystery of which last name (maiden or married) our professors would use was our first, in a very long line of connections.   We were inseparable, to the point that our classmates would refer to us as the “twins”.  Valerie’s Dutch heritage saved me on many a night as a newlywed who had married into a very Dutch family.

Following teacher’s college, I witnessed, with great respect and adoration, Valerie’s dedication to the continual pursuit of learning ~ from her Masters to her Doctoral degree.  I watched with pride as she went from teacher to learning coordinator to vice principal to principal to Superintendent and then to Associate Director ~ being admired and respected each step of the way.

It was through Valerie’s example and “nudging” that I pursued both my Masters and my Supervisory Officers Qualifications.  She has been that constant voice in my head ~ pushing me to do more, be better.  She will be missed in the “Valley”, but I have no doubt that she will continue to impact education ~ If not locally, then certainly globally.

Suzanne (Barr) Earl was also recognized last night. Suzanne and I met during my final practicum at St. George’s.  She was a brand new teacher, who was kind enough to take me under her wing.  I ended up getting my first contract position at St. Georges and within months we became known as SB2. As two new teachers, we busted our butts and did everything from school shows (completed with complex choreography), to coaching to concerts (complete with funky costumes).  We team taught from the get-go and spend many an evening and weekend planning.   Our worlds continue to intertwine as we both became pregnant at the same time.  Our daughters were born 2 weeks apart and our sons were born two year later, a few months apart. Motherhood allowed us to transition from team teaching into job sharing and we took our SB2 team on the road and became a part of the very first Wilfrid Jury staff.  Our planning sessions transitioned into “mom and baby” swimming lessons first, then lesson planning second, while the babies napped.   Having such a wonderful friend and colleague allowed me to find that all important balance between motherhood and teaching.  Suzanne taught me the importance of true collaboration.  I know that I would not be such a strong proponent of the power of collaboration, if I had not had the gift of working with Suzanne.

I spent the rest of the evening reminiscing about these women ~ the shared good memories, the antics, the tears, the highs and the challenging times ~ the impact that they both had on me as an educator, as a mother and as a learner. I reflected on how education has changed, but how the core beliefs that we shared 30 years ago are still at the center of so many of my decisions. 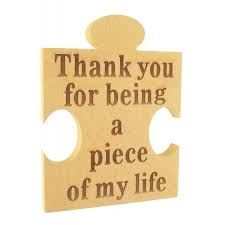 I admire their decision to take this next step in their journey, although I can’t even begin to imagine that next step in my own life.  They both “just knew” it was time and what a gift that must have been for them.

So, here’s to a few more laps…. But like most marathons, I have the power and stamina to make them count, because of the amazing impact of these two educators, who were there with me at the beginning of this race!