Part of my Sunday routine is to craft our weekly Currie Crew Connection.  We use SMORE as the platform as it is visually appealing and easy to embed videos, links, and photos.   We’ve intentionally moved away from a format that outlines upcoming calendar events as school life has a way of changing between the serenity of Sunday afternoon calendar dates to the reality of the ebbs and flows of a busy week.  Instead, we’ve used the weekly Connection as a means of reflection from the past week, upcoming items of importance and frequently something interesting or thought provoking that I’ve stumbled upon during my social media scrolls.

This weekend, after much reflection and conversation with our leadership team, I found myself crafting a paragraph that I knew may provoke some feelings of disappointment, frustration, and annoyance on the part of our staff.  I chose my words carefully and honestly ~ hoping that my intent was not to frustrate but to provoke some reflection and evolution of practice.

As we creep closer to December 1, I’ve been anticipating the reveal of the Elf on a Shelf in some of our classes.  This holiday tradition is about 13 years old and hence, my own children were well beyond their believe in Santa Claus when this idea came into being.  So, although I’ve watched friends post their nightly elaborate stagings of Elves in various positions, it was not something that I took part in as a parent. 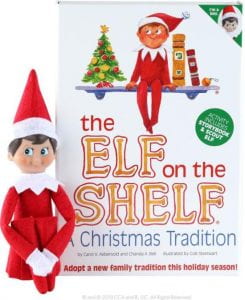 Over the past couple of years, the Elves have started to appear in some of our Kindergarten and primary classes and I’ve have had conversations, doing my best to understand the educational value of having them perched in various positions ~ but always being uncomfortable knowing that the theory behind the Elf is that he/she is watching children and reporting back to Santa Claus ~ naughty/nice.

As a school, with a highly diverse population (many of our students do not celebrate Christmas) and a mantra that we are intentionally creating a safe, inclusive, and welcoming school community, we decided to ask staff to rethink the Elf on the Shelf activity.

Having an inanimate object watching for nice/naughty behaviour seems counter to creating a safe environment.

Santa’s Elf is not inclusive for families who do not celebrate Christmas.

Especially these days, we have no idea how families are navigating the holidays and the last thing we want to do is to add to their stress.

It’s never easy to disappoint or frustrate a staff that you know has the best interests of their students at the heart of their decisions.   It would have been easy to turn a blind eye to the situation and quietly shake my head and avoid the conversation. But over the years I’ve learned that the easy path is rarely the right path.

As we continue to learn about Culturally Responsive Pedagogy and evolve as educators, we need to critically question some of our in-school holiday practices.

Here’s hoping that I’m not on Santa’s naughty list for leaving the Elf shenanigans up to our families who chose to partake in this tradition in the comfort of their own home.

Would love your thoughts on this.

3 thoughts on “Shelving the Elf”