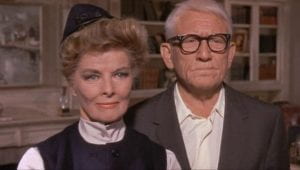 Spencer Tracy and Katharine Hepburn are my favourite screen couple of all time. To this day, I’ve yet to find a cinematic couple with such chemistry and relatability.  Most of their movies I have watched over and over again.  Even though I’ve seen “Guess Who’s Coming To Dinner?” over a dozen times, I still tear up as Tracy delivers his final monologue.  “Now, Mr. Prentice, clearly a most reasonable man, says he has no wish to offend me, but wants to know if I’m some kind of a nut. And Mrs. Prentice says that like her husband, I’m a burnt-out old shell of a man who cannot even remember what it’s like to love a woman the way her son loves my daughter. And strange as it seems, that’s the first statement made to me all day with which I am prepared to take issue. Because I think you’re wrong. You’re as wrong as you can be.

I admit that I hadn’t considered it, hadn’t even thought about it, but I know exactly how he feels about her. And there is nothing, absolutely nothing, that your son feels for my daughter that I didn’t feel for Christina. Old? Yes. Burnt out? Certainly. But I can tell you the memories are still there – clear, intact, indestructible. And they’ll be there if I live to be 110.”

Knowing that Tracy and Hepburn were together for 26 years and Tracy died shortly after filming this movie makes his description of mature love not only relevant but truly authentic.  I can’t help but imagine that the tears in Hepburn’s eyes were very real and not artificially produced.

So, imagine my delight when tonight, as I was clicking through the channels, I landed upon TCM (Turner Classic Movies) and a new to me Tracy/Hepburn collaboration ~ Desk Set was about to start.    It was the movie they made in 1957 just prior to their final production, Guess Who’s Coming to Dinner?  In amongst the zany Rom-Com components (mismatched lovers, and quick witted dialogue), these two lead actors seamlessly play off of each other line by line.  Hepburn continues to be a woman for all decades ~ strong, stylish and sophisticated.  Tracy beautifully plays the bristly, yet loveable mature leading man. Beyond the Rom-Com components, the plot dabbles in the concept of man vs. machine and machine taking the place of man ~ or in this case women.   Hepburn leads a group of women who are responsible for the reference department for a broadcasting network. They confidently answer queries from historical events, to specific stanzas in poems to a player’s batting average. Tracy’s character is responsible for introducing an early iteration of the computer to the network. As one can predict, it turns out that the women are far more efficient and effective than the computer, which becomes overwhelmed with complex questions. The plot concludes with the realization that the best course of action is for the computer to complement the knowledge base of the women, not replace it.

Fast forward 65 years and unfortunately the playful plot in Desk Set with the happy ending, actually foreshadows what has come true in so many industries.

According to my Google rabbit hole search, “The World Economic Forum (WEF) estimates that the increased use of technology and automation is expected to displace 85 million jobs by 2025. Technology is currently performing 30% of overall tasks, while humans are doing the remaining 70%, a ratio that is expected to shift to 50:50 in the next few years.”

I continue to wonder what this means for education.  We know that as a result of the pandemic, technology has certainly played an increased role in the last two years as we shifted to online learning as a way to support students while schools were closed.   But I’m firm believer that there is absolutely no form of technology that can ever replace a masterful educator.