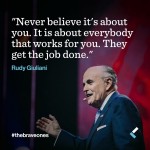 The final speaker at Leadercast 2015 was Rudy Giuliani,  the former mayor of New York City. Although he has had  a remarkable career, he is probably best known for  supporting the people of New York following the  terrorist bombing attacks on the Twin Towers. Giuliani is a laid  back speaker who wanders across the stage as he retells  his story, weaving in his various leadership skills and attributes.

In reviewing my notes, I had highlighted a simple 5 word sentence which resonated with me, more than his explanation of his six leadership traits.

“You go to the scene”

Giuliani was obviously talking about his decision to immediately head down to Ground Zero, but I wonder if that phrase has similar implications for our role in educational leadership.

As school administrators, how often do we “go to the scene” when it comes to learning?  I know as a former school based administrator in a large complex elementary school, that when there was a 911 on the yard I immediately “went to the scene”.  Everything was dropped until the student(s) was safe. Do we have that same sense of urgency when it comes to ensuring that our students are learning? Is our presence any less necessary in the classroom, supporting our teachers as they teach?  And what is our role “at the scene”? 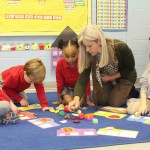 As a system principal, how often do I leave the comfort of the board office and “go to the scene” in our schools?

For system leaders, who are responsible for educator learning, how often do we “go to the scene” and see first-hand if/how our work is landing on the student desk?

Giuliani’s presence on that fateful day was a pivotal point in making his leadership and his commitment to the people of New York visible. There was lots of important work to do in the following days and months. But I wonder if the people of New York were more prone to follow his lead because of his first step.

And likewise, there is certainly more to educational leadership than just showing up at the scene, but being there and seeing the learning first hand is a good starting point.

As a leader, do you automatically “go to the learning scene” or do you wait for the 911?