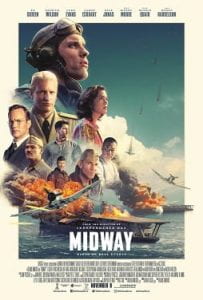 If you have yet to watch the 2019 War/Action film Midway and it’s on your watchlist, you may not want to read any further, other than to know that it well worth the 2 hours and 18 minutes time investment.  By nature, I’m rarely drawn to war films, but as my last few movie suggestions had been flops, I thought that at least my husband would enjoy this one.  The fact that the movie heralded a star-studded cast lead me to believe that it would not be completely intolerable.   And yet, as has occurred time and time again, just like we tell our students, “Don’t judge a book by its cover”, I seem to require constant reminders to, “not judge a movie by its genre”.
I found myself drawn into the storyline, (which depicts the six-month period between the bombing of Pearl Harbour the Battle of Midway ~ the turning point in the war for the Americans) and of course the outstanding cinematography.  But it was knowing that this movie was based on actual events and that these characters were playing individuals who authentically impacted the outcome of the war during those six months.  I recall watching an episode of the Graham Norton show where Tom Hanks was recalling meeting one of the many “real-life” characters that he has playing in movies.  He said to Captain Chesley from the movie, Sully, “I’m going to playing you in this movie. So far intense purposes, I’m You.  But I’m going to say things and do things that you never said or never did”.   So, although I’m well-aware of the creative license that directors take when undertaking the retelling of an actual event, I can’t help but wonder if some of the traits that these actors so flawlessly portrayed were evident in these individuals.

And of course, as an occupational hazard, as we watched each character’s storyline unfold, I started to draw parallels between educational leadership and staging a battle.

Dick Best ~ the hotshot cowboy pilot, who loses his best friend in the Battle of Pearl Harbour and for whom Midway becomes even more personal. During an attack, he makes a fatal error and doesn’t check his oxygen tank.  Instead of going back, he refuses to lead his squadron without a leader and puts his own life and ultimately a career that he loves at risk.  He gets the job done, but at an extreme cost.    We’ve all known leaders who take this approach.  They put their own health at risk, for the sake of their school community.

Edwin Layton ~ the Pacific Fleet Intelligence officer, who had predicted Pearl Harbour, but either wasn’t listened to or didn’t share it assertively enough.  Six months later, he was able to predict that the Japanese were going to bomb Midway, which allowed the Americans to get there first.   As he grew in his role, he became more assertive and more confident.  I often think about leaders when they are starting in their role ~ they know their stuff and they have great ideas, but they either assume that others won’t listen, or unfortunately have encountered others who wouldn’t listen.

Jimmy Doolittle ~ the pilot who led the raid over Tokyo.  In the movie, he is depicted as “charmer” who can convince a group of Chinese soldiers to take him and his raiders to safety.  Although not shown in the movie, the fall out from the Doolittle raid left ¼ of a million Chinese people dead as a result of Japan’s retaliation for their part in assisting the Americans.   Have you ever known a leader who, although led with the greatest intention, the fallout of their actions had a lasting negative impact on a school community? 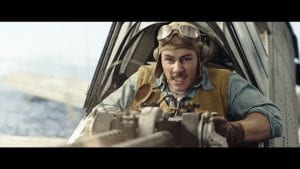 Aviation Machinist Mate First Class Bruno P. Gaido ~ at a pivotal moment, Bruno jumps into the cockpit of one of the fighter planes, while it is still on the carrier and begins to fire back at the incoming enemy fire.  He is successful and immediately promoted for his bravery.  When asked about his bold move and his seemingly no fear mantra, retells the story of his uncle, who used to work on the Empire State Building, miles above the ground on a steel girder every day without any ropes or safety harnesses.   He never fell once, nor let fear paralyse him from his work.  And then as fate would have it, one day walking home a cab jumps the curb and kills him.  His mantra was, “Why worry?”   Although Gaido does not survive to see the victory, his attitude about embracing opportunity, living in the moment, and doing what’s right is definitely a leadership skill that I admire in so many of my colleagues.

Although leading a school is nothing like planning and executing an air raid on an enemy, the skills required to lead individuals to do work that is meaningful and at times challenging certainly have their similarities.

If you’ve watched the movie, I’d love to know if you made any connections to leadership.