It’s hard to believe that it’s been a whole year since I embarked on my quest to publish “One post a day in the month of May”. So as I turned the page on the calendar in the kitchen this morning, I couldn’t help but reflect on last year’s challenge and the benefits that came with daily writing and posting.  During the month of May 2015, I found myself more observant, more reflective and more purposeful in what I was reading knowing that before midnight one of those encounters was going to be the inspiration for my daily post.

Yesterday as I was clicking through the channels, I happened upon the 2005 movie, “The Chronicles of Narnia: The Lion, the Witch and the Wardrobe and I was immediately transported back to 1997 when I was teaching Grade 5 at M.B.McEachren.  Back in those days, full class novel studies seemed to be our best thinking in terms of literacy instruction and I would venture to guess that my unit on The Lion, The Witch and The Wardrobe was by far one of my most favourite ways to engage my students.  We fumbled our way through making Turkish Delight, created dioramas with hinged wardrobe doors and with this particular group of students, we tackled Literature Circles, in the name of differentiation. 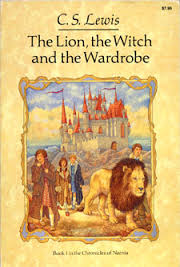 I can clearly recall rearranging our desks in a circle and engaging in a deep conversation about the emerging themes in the book, the parallels to Christianity as demonstrated by the characters in the book and the author’s intent in having the mice gnaw away at the ropes binding Aslan. It was one of the teaching moments when you feel as if you are in the “zone”.   No time to think about what was going to happen in the next period, an upcoming parent meeting or items for the division meeting agenda.  I was totally proud of the conversation that my students were having and naively connecting it somehow to my teaching.  They were saying all the “right” things and making their way through the prescribed discussion topics.

Then, it happened…. Michael (with complete sincerity) boldly stated that the White Witch embodied the redeeming qualities of a heroine and we were giving her a “bad rap”.  Now, to add to the background story, Michael typically challenged most of what was asked of him.  He was the last one to submit his work, he found a variety of creative reasons for doing an alternate activity and his parents frequently assisted with providing inventive excuses for lost and misplaced assignments.

As he shared his statement, the rest of the students stopped and waited for my response.  I will admit that initially I assumed that Michael was looking for a reaction ~ and for a split second he received it.  But as we all continued to dig deeper and ask him to explain his thinking, it became clear that his perception of the White Witch and her role in enticing Edmund could indeed be connected with the qualities of a heroine.  Her role was pivotal in Edmund’s decision and ultimate redemption.

It was at moment that I realized the power of creating the conditions in a classroom for not only welcoming but for encouraging opposing views.  I could no longer go back to the boring classroom environment where all students were working towards the one “right” answer.

I certainly didn’t know or use the term “cognitive dissonance” in 1997, but thanks to Michael, I’ve looked for opportunities to engage both students and educators in discussions wherein discord has led to a deeper and more meaningful understanding for the last 20 years.

As an educator, can you recall a defining moment in your career?