Day 20 ~ Something a little different today… 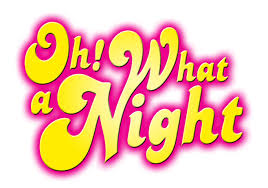 About seven years ago we traveled to Toronto with my parents to enjoy the musical, Jersey Boys. A year ago, the same musical came to our local venue and I, once again, enjoyed every note, every dance move and the twists and turns woven into the story line of the lives of the famous four from Jersey.  And then tonight, I held in my hand a ticket to see the original Jersey Boy, Frankie Valli in concert.  I hadn’t really done the math on his age, until our waitress made some comment about him being 82.  One quick Google search and indeed, the famous singer recently celebrated his 82nd birthday on May 3rd.  I’ll admit that as we found our seats and waited for the lights to dim, I started to wonder what the next two hours were going to be like with the octogenarian serenading the crowd with hit songs from the last 50 years.

As the opening sequence played on the big screen and images of the band from their early days transitioned through the decades and into the solo career of Valli, the crowd became more animated as they anticipated the first visual of the singer.  Then, in the darkness of the stage, you could see a small-framed figure with an eloquent, soft-shoe shuffle, that we tend to associate with people of a certain age, make his way to center stage.  The lights came up and within the first bars of Grease, any concerns about the quality of the performance (as connected to the singer’s date of birth) disappeared.  Valli hit those incredible high notes, sounding just like I remember them on my parents’ LP from decades ago.  He didn’t miss a beat, a word, an opportunity to educate the crowd or the occasional self-deprecating “dig” about his age.  At one point,  he did a short skit wherein he tried his hand at rapping.   The audience loved it.

We sang along to the oldies, danced when the tempo lead itself to getting up and celebrating and quietly let the smooth sounds of the love songs take us back in time or conjure up the image of someone we love.

The added layer to seeing and hearing Valli in person was the storyline of the Broadway show.  And although I have no doubt that the actual events couldn’t help but be somewhat contrived in order to fit in the musical numbers and begin and end within a couple of hours, there must have been truth to some of it.  So tonight, when the stool was placed front and center and the first few notes of “Can’t Take My Eyes Off You” were played, I couldn’t help but wonder does Valli still get that same thrill when the horn section begins to play?

Or when Valli and his talented, very good-looking “4 Seasons” sang “Oh What a Night” and the audience cheered and sang along, did most of us automatically connect with the scene in the play that inspired that song?

In my mind, there is nothing like a live show and tonight’s show didn’t disappoint. I learned (once again) that age is nothing more than the number of candles on your birthday cake.