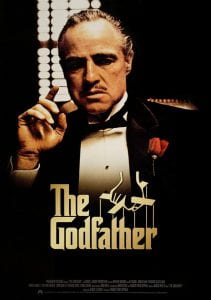 Confession Time ~ I have never seen The Godfather or any of the sequels.  I was never a Marlon Brando fan, and the storyline has yet to appeal to me. I am wondering if maybe I didn’t want to watch a movie where at some point in the script it called for a horse’s head to be left in a bed as a symbol of “meaning business”.  I have certainly enjoyed the work of the other actors; Al Pacino, Diane Keaton, Robert Di Niro, and James Caan ~ but not enough to draw me to this movie.

I do, of course, know a bit about the story line and have enjoyed many of the cinematic and cultural references in other movies.  Such as when Joe Fox (Tom Hanks) is trying to convince Kathleen (Meg Ryan) to fight to save her independent bookstore from big bad box store ~ Fox Books in You’ve Got Mail.  I love her reaction, “What is it with men and The Godfather?” And of course, throughout popular culture there have been several occasions for actors to recite the ever recognizable, “I’m gonna make him an offer he can’t refuse”

So, it was with some trepidation, that I landed on the Paramount + limited series, “The Offer”, which tells the story of the making of The Godfather.  I was immediately drawn in the world of the early 70’s from the humble home of the writer Mario Puzo to the lush mansions and landscapes of Hollywood.  The story is told from the lens of the producer Al Ruddy (Canadian born) and chronicles the setbacks and successes of making a mafia film in New York City.  Interestingly enough, Ruddy is still alive. So, unlike some mockumentaries, his perspective (or at least how he remembers things) is authentic ~ although I would imagine it is sprinkled with creative license similar to the spices sprinkled on the Italian food which serves as a predominant theme throughout both the filming and the final product.  From the Mafia Bosses to the Studio Bosses to the Mayor New York to the most recognizable entertainer of the era, the underbelly of the system and the connective tissue of who owes who, who is sleeping with whom and who owns who is brilliantly reflected. 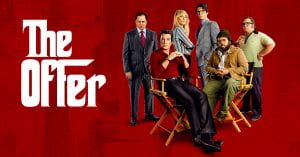 The personal and professional sacrifices of many of the main characters, leave the viewer on the edge of their seats at the end of each episode.  I also love how the women are depicted.  It is evident that Ruddy, although misguided and egocentric, at times, knows the power of a true partnership.

With three more episodes to go, I am excited to learn more about this journey from best selling book to box office blockbuster.

And yes, I am now going to find some uninterrupted time to watch The Godfather.  Although, I cannot promise that I will watch all three installments.

In knowing that time is a precious commodity, how do you decide what to watch, read, listen to?  Whose recommendations are most credible?  Do you find value in knowing the backstory of the artist, the author or the actor?