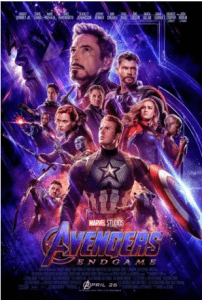 We finally found some time (and ticket availability) to go and see The Avengers:Endgame tonight.  For the past two weeks, I’ve heard nothing but amazing reviews from everyone who has watched it and who has been dying to share the story line.  I can truly say that all 182 minutes of this movie were absolutely captivating.  The writers Christopher Markus, Stephen McFeely wrote a script that was indeed worthy of honouring The Avengers series and no doubt fed the appetite of the Marvel super fans.

The costumes and special effects (loved watching it in 3D) did not disappoint, nor did the visual appeal of the various locations throughout the galaxy. It never ceases to amaze me that someone thought this all up in their mind.  But, it was the story line and script  that truly made this a Marvelous Marvel moment for me.

These days, I find it rare, in our instant gratification, Netflix binge watching world, to experience a script that can maintain a viewer’s interest for such a sustained period of time. Most scripts become formulaic.  We know when the punchlines will be delivered, the tempo and timing of the emotional rollercoaster and when to expect both the climax and the neat ending.  And with Marvel movies, we know to wait for a scene following the credits

However, the writers of Endgame seemed to throw out the formula (especially those scripts that has become synonymous with Comic Characters) and create a fantasy world filled with human story lines and emotions transcending the boundaries of the future, present and past.  Excessive battle scenes were replaced by emotional reunions which transcended time. Life altering decisions transformed the superhero into a super human which provided one of the many layers to the title of Endgame.  Taking viewers back to familiar scenes in previous films and continuing the story line beyond what we originally saw was a brilliant way of helping us to understand the characters, even more deeply.

The references to past movies with seemingly similar themes of time travel were sprinkled throughout the script and brought a smile to the faces of those of us who could nod in agreement and in recognition of the comedic one-liners.

Finally, this film explored the frailty associated with loss by writing a script in which even the super heroes were not immune to losing themselves and their strength in times of pain and regret.

Kudos to the Marvelous Marvel writers!