It may have “all started with a Big Bang”, but after 12 seasons, the Big Bang Theory writers gave their loyal viewers a well-written and heartfelt ending ~  which included closure to story lines, a “finally” repaired elevator and scenes that were so moving that they did not require the live studio audience to break out in laughter.

For those of you who may not be familiar with the premise of this show, it becomes apparent within the first few episodes that the main character, Dr. Sheldon Cooper has only quest in life and that is to win the Nobel Peace Prize ~  any cost. It would be interesting to do a word search and see how many times, within the 279 episodes, the writers included a reference to the Nobel Peace Prize.

Like so many quests, the hero’s journey is greatly enriched by the detours, the challenges and the times when all hope is lost. In the case of Sheldon, the writers brilliantly created a cast of characters who accompanied our hero on his quest.  They provided comic relief, encouragement and on several occasions, reminders to re-evaluate the cost of being so singularly focused.

Throughout each season, we watched as Sheldon allowed himself to experience deep friendships, love and even marriage.  But all the while the quest was still there, lurking below the surface ~ to the point that on his wedding day, with the help of his bride, the magic formula suddenly made sense.  The hero had finally achieved a major milestone, which made the quest attainable (with significant help from his wife). 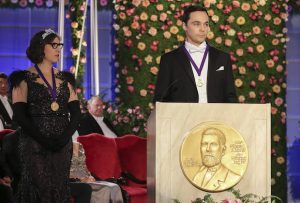 As the final season draws to a conclusion, Sheldon learns that he and his wife, Amy, will be indeed honoured with the Nobel Peace Prize and he begins to craft his acceptance speech.  We see the hero revert to his former, self-absorbed self and write 90 minutes worth of his own accomplishments and in the process alienate himself from his “band of brothers”.

With minutes to spare, our hero has a change of heart and instead of regaling the audience with his speech, he turns their attention to his friends and acknowledges their role in his quest.  It turns out that those relationships, those challenges, those detours and those times when all faith was lost were the true prize.

As we near the end of this school year and we begin to reflect on the goals that we set in September, (our quest) is it important that we reached that pinnacle?  Or is it the learning, the challenges that we overcame and the relationships that were forged or deepened throughout our journey, that we will remember?